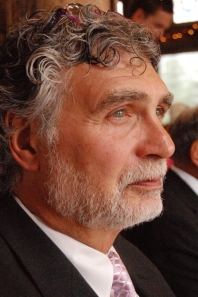 With the inimitable Steve Brown: LISTEN

On NPR’s “Eight-forty-Eight” Program from WBEZ in Chicago: LISTEN

On WGN Radio’s “The Sunday Papers with Rick Kogan”: LISTEN 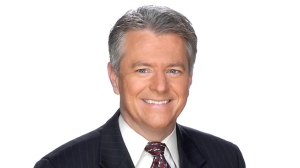 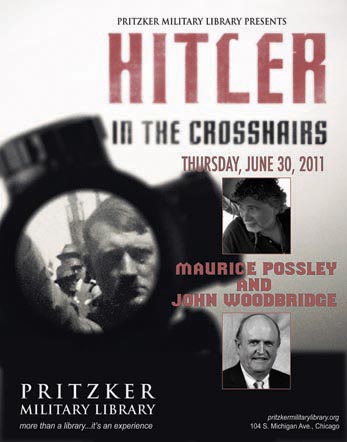 Visit the Pritzker Library site to watch the video of the Hitler in the Crosshairs event (with special guest appearance by MoPo’s youngest son, Vasco Fitzmaurice Possley, who asks the first question during the Q & A.): WATCH HERE

Or listen to the Podcast: HERE

More than 40 years ago, a Swift Current, Sask. man who dreamed of opening a Nazi memorabilia museum thought he had pulled off the ultimate coup in buying the gold-plated pistol that Adolf Hitler used to commit suicide.

In 1968, Andrew Wright told the local newspaper that the gun — purchased from a dealer in Cleveland — would “put Swift Current on the map. There are hundreds of collectors in the United States who have never seen it and they will come up.”

Not only did Wright misjudge the attention he expected (the horde of curiosity seekers never materialized), but he was very wrong about the provenance of the gun — a gold-plated, 7.65 Walther semi-automatic pistol with Hitler’s initials inlaid in gold on the ivory grips.

In fact, the truth is far more dramatic.

As John Woodbridge and I recount in our newly released book, Hitler in the Crosshairs: A GI’s Story of Courage and Faith, the pistol was taken by an American soldier during a dramatic attempt to capture or kill the dictator in Munich in the waning days of the war.

This new saga is the story of the soldier, Ira “Teen” Palm, a native of Mount Vernon, N.Y., and how he came to cross paths with Rupprecht Gerngross, a German soldier who not only bravely engineered a brief revolt of German soldiers and citizens in Munich, but at one point attempted to assassinate Hitler himself.

A first lieutenant in the U.S. Army who earned numerous medals for valour under fire, Palm had landed on the shore of France in 1944 and fought his way into the heart of Germany, reaching the outskirts of Munich in late April 1945. As Soviet forces encircled Berlin and the Allied armies approached Munich, what was then called “the greatest manhunt in history” was on — the search for Hitler.

In a striking parallel to the search for Osama bin Laden, American leaders believed that even if the entirety of Germany was conquered, the war might never end as long as Hitler remained alive. Intelligence at the time suggested that Hitler was amassing troops and weapons in the Bavarian Alps — the Great Redoubt — where he would regroup and continue to wage war.

Gerngross, a German soldier who headed an interpreter unit in Munich, had been gathering weapons and recruiting soldiers and citizens to stage an uprising against the Nazis in Munich in an attempt to prevent the total destruction of the city, a fate suffered by so many great German centres.

In 1944, Gerngross learned that Hitler planned to travel through Munich by car and would be accompanied by an aide who lived across the street from Gerngross. He speculated the aide would stop to see his family, and so Gerngross decided to try to kill Hitler.

On the day Hitler was to arrive, Gerngross sat in the attic of his home with a rifle and waited until Hitler’s car arrived. Anxiously, he watched as the aide went inside briefly and then came back out. His young daughter skipped down the sidewalk and Hitler’s car door opened and a man — it had to be Hitler — stepped out and knelt down to embrace the girl.

Gerngross trained the crosshairs on the back of the girl’s head, waiting for the moment when she would step back and he could pull the trigger. Suddenly, the aide came out of the house and Hitler pulled away and vanished into the car.

The failed attempt only propelled Gerngross more forcefully. In 1945, an American flyer who had survived when his plane was shot down and who later escaped a Germany POW camp was being smuggled back to the Allies through the opposition underground in Munich. Gerngross recruited the flyer to ask the Allies to stop bombing Munich, so that the uprising could begin.

At the same time, Palm volunteered to lead a group of soldiers — with the help of Gerngross’s men — undercover into Munich to capture or kill Hitler.

Palm and his men did break into Hitler’s apartment, but the dictator was not there. Before they left, Palm took the gold-plated pistol from Hitler’s desk.

Gerngross’s uprising was short-lived, but he achieved his goal — Munich, though badly damaged, did not suffer total annihilation.

After the war, Palm, who was wounded slightly as he fought his way out of Munich, gave the pistol to Charles Woodbridge, his close friend and pastor of First Presbyterian Church in Savannah, Ga. The gun was later stolen and disappeared until it made national news in 1966 when a Cleveland gun dealer announced it was for sale.

Wright learned of the gun when a photograph of it appeared on the cover of Argosy magazine. He and his wife drove to Cleveland, where they purchased numerous pieces of Nazi memorabilia, including the pistol, which had been a gift to Hitler on his 50th birthday in 1939 from the Walther family, manufacturers of hundreds of thousands of weapons.

At the time, Wright was sure that the gun would be the centrepiece of his museum. He said the pistol was the most sought-after prize in gun-collecting circles.

But by 1987, his dream that Swift Current would be a magnet for admirers of Nazi memorabilia was still just that — a dream. And so the gun was sold at auction for what was then the highest price ever paid for an item of military memorabilia — $114,000 — to a purchaser whose identity was not revealed.

The gun has since changed hands several times. An Australian, Warren Anderson, owned it for a time. It was later sold to someone on the West Coast of the United States who has asked to remain unnamed.

When Wright purchased the gun, he believed it was Hitler’s suicide weapon because of reports that there was blood under the grips. The actual weapon that Hitler used to kill himself in his bunker in Berlin has been proven to be a much different pistol.

Which leads one to wonder — just whose blood is under the grips of this pistol? Could it in fact be the blood of Ira Palm — the man who volunteered to take out Hitler?

Maurice Possley, a Pulitzer Prize-winning journalist formerly with the Chicago Tribune, is an investigator and researcher for the Northern California Innocence Project at Santa Clara University School of Law.

SALISBURY — “Hitler in the Crosshairs” reveals what the authors believe is new information about a plot to assassinate Adolph Hitler during World War II.

It also tells some of the story of Ira “Teen” Palm, a man who once lived in Salisbury and rose through the ranks to eventually work at the Pentagon.

And it is a story about Hitler’s gold-plated pistol, which, the authors say, Teen Palm took from Hitler’s office in a raid of his apartment in Munich.

Palm was a sensitive, self-doubting musician when World War II started. But once he completed his training and was shipped to Europe, he blossomed into a leader under the most difficult of conditions.

Author Woodbridge is the son of Charles Woodbridge, who was once pastor of First Presbyterian Church in Salisbury. Palm, rediscovering his faith, became one of Charles’ best friends, due to the minister’s preaching and teaching.

Palm met Helen Raney of Granite Quarry and later married her. The couple spent much time in Bible study, and in their long years in the military, shared their faith with many soldiers and others.

So, while telling the story of World War II and the attempt on Hitler’s life, the authors use many of Palm’s letters to his wife, his pastor and others to show his ardent faith in God. We learn little about the war through the letters — in those days, mail was heavily censored by the military, and Palm was careful never to divulge exactly where he was or what he was doing.

Suffice it to say he was in some of the bloodiest, most dangerous battles of the war. Not once, but twice he was standing next to his commander when the commander was gunned down.

READ THE REST OF THE ARTICLE HERE.

I found one! Maurice Possley, a Pulitzer Prize-winning journalist, has taken co-author John Woodbridge’s story and fashioned a fascinating true story line about Hitler, a young singer/sax player/solder, an influential pastor, in-the-trenches WWII battles (the kind that create legends and heroes), new information on the German resistance movement, and a gold-plated pistol with links to the Fuehrer himself.

I could be biased because I’ve met Possley multiple times and thoroughly enjoyed his 2001 book, a true account, Everybody Pays: Two Men, One Murder and the Price of Truth, with co-author Rick Kogan.

Possley won a Pulitzer in 2008 for Investigative Reporting at the Chicago Tribune. He has now applied those same instincts and street smarts to this remarkable true story, Hitler in the Crosshairs: A GI’s Story of Courage and Faith. Blend Possley with co-author John Woodbridge’s experience as Research Professor of Church History and Christian Thought at Trinity Evangelical Divinity School, visiting prof at Northwestern University and the University of Paris, France, and you have the makings of a historically accurate, WWII page-turner.

I was struck with the story line—and the creativity of it. The authors threaded this true account around every twist and turn with both skill and drama. Some organizations, I’ve noticed, take an absolutely amazing story line of God at work and then dumb it down to unimaginable nothingness. Boring. Bored. Clunk!

Not this story! It’s historical—with new stuff. Inspirational—with disappointment and death. Separation—but with life-breathing love letters. Maturity and humility—perhaps softened by sadness. And the stunning beauty and impact of integrity—growing the fruits of faithfulness, generation after generation. Oh…and then there’s the pistol.

The story line: ingenious. The redeeming insight: maybe the form will rub off on your organization as you strategize how to tell your story in more compelling ways.

To order this book from Amazon, click on the title for Hitler in the Crosshairs: A GI’s Story of Courage and Faith, by John Woodbridge and Maurice Possley.

MOUNT VERNON — It was the spring of 1945 and Lt. Ira “Teen” Palm, Mount Vernon High School class of ’32, was standing in Adolf Hitler’s Munich apartment.

Palm and his raiding party had just kicked in the apartment’s front door, hoping to find Hitler and hasten the war’s end.

Instead they found the place deserted, forcing Palm to lead a mad dash through the city, back to the safety of the American lines.

But Palm would not make that run empty-handed. Opening the drawers of the desk in front of him, he grabbed some stationery and an ivory-handled, gold-plated pistol bearing a set of infamous initials: AH.

Palm’s story — previously unknown even to family — is told in “Hitler in the Crosshairs,” a new book by John Woodbridge and Maurice Possley, a Pulitzer Prize-winning journalist.

READ THE REST OF THE ARTICLE HERE.